Martín Caparrós (born May 29, 1957 in Buenos Aires, Argentina) is a writer. His father was Antonio Caparrós, a renowned psychiatrist. Caparrós begun professional writing at age sixteen, shortly after graduating from high school at the Colegio Nacional de Buenos Aires. His first professional job in journalism was with the now defunct daily ''Noticias''. In 1976, Caparrós fled to exile following the military coup led by General Jorge Rafael Videla. In Paris, he obtained a degree in history at the University of Paris. Caparrós would later relocate to Madrid, Spain. During the early 1980s, he resettled to Buenos Aires and since then he has produced a vast body of work including fiction and nonfiction alike. Provided by Wikipedia
Showing 1 - 13 results of 13 for search 'Caparrós, Martín', query time: 0.03s Refine Results
1 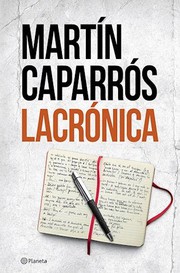