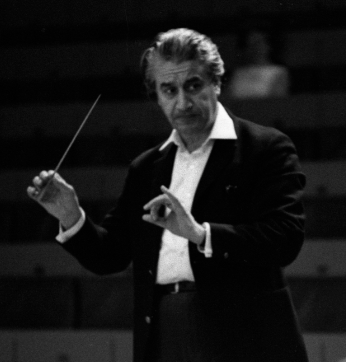 Sergiu Celibidache (; 14 August 1996) was a Romanian conductor, composer, musical theorist, and teacher. Educated in his native Romania, and later in Paris and Berlin, Celibidache's career in music spanned over five decades, including tenures as principal conductor of the Munich Philharmonic, Berlin Philharmonic, Sicilian Symphony Orchestra and several other European orchestras. Later in life, he taught at Mainz University in Germany and the Curtis Institute of Music in Philadelphia, Pennsylvania.

Celibidache frequently refused to release his performances on commercial recordings during his lifetime, claiming that a listener could not have a "transcendental experience" outside the concert hall. Many of the recordings of his performances were released posthumously. He has nonetheless earned international acclaim for his interpretations of the classical repertoire and was known for a spirited performance style informed by his study and experiences in Zen Buddhism. He is regarded as one of the greatest conductors of the 20th century. Provided by Wikipedia
Showing 1 - 1 results of 1 for search 'Celibidache, Sergiu, ', query time: 0.00s Refine Results
1