He was born in the town of Baradero. He studied at the University of Buenos Aires, and later became a professor at the same institution. He specializes in the literature of the Siglo de Oro, including the life and work of Miguel de Cervantes. He has published more than 20 books of fiction and non-fiction, and has won a number of Argentine literary prizes. Among his noted works are the novels ''Mitre'' (winner of the Premio Especial Ricardo Rojas), ''Vida interior'' (Premio Emecé), and ''Más liviano que el aire'' (Premio Clarín). His 1990 novel ''Miguel'', a fictional biography of Cervantes, was nominated for the Premio Herralde, as was the later novel ''Amores enanos''. His book ''Una lectura del Quijote'' (Seix-Barral, 2004) is regarded as a major contribution to the field of Cervantes scholarship. Provided by Wikipedia
Showing 1 - 4 results of 4 for search 'Jeanmaire, Federico 1957-', query time: 0.01s Refine Results
1 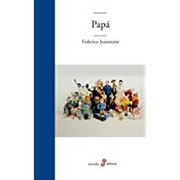